I have taken a bit of a break from blogging as I have been busy working, gardening, and rehearsing the play Hamlet.

Is this possible you ask?  Is this relevant to Geek culture you ask? 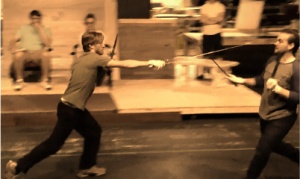 (Hamlet and Laertes in the famous duel.)

I can hear some of you groaning. Shakespeare isn’t everyone’s cup of tea, however, I would offer a thought on this. Shakespeare permeates Geek culture, although you may not be aware of it. There are several references I can think of right now just from Hamlet. 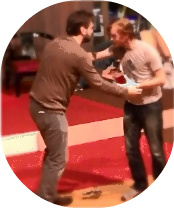 (Hamlet and Horatio, near the end of the play. “Horatio, tell my story.”)

From Start Trek: The Next Generation, Picard quotes Hamlet to Q in the episode “Hide and Q” trying to defend humanity.

“What a piece of work is man! How noble in reason, how infinite in faculties, in form and moving how express and admirable, in action how like an angel, in apprehension how like a god!” (II.ii.304-308).

When you watched that movie, did you understand why that quote was so appropriate? Did you know what the title of the movie meant? If you had read or seen Hamlet, you may have and I promise you it enhances your appreciation for Star Trek when you understand the references.

From that same movie comes this quote:

CHANG: “TICKLE US, DO WE NOT LAUGH? PRICK US, DO WE NOT BLEED? WRONG US…SHALL WE NOT REVENGE?” – THE MERCHANT OF VENICE, ACT III, SCENE I

I was fortunate enough to act in The Merchant of Venice 2 summers ago. I was in the scene where Shylock says these lines to my character Salarino and another character after we have teased and berated him. Shylock felt pushed to his limits by the anti-Semites in Venice. He felt he had no choice but to demand his pound of flesh. The similarities to the Klingons are even more obvious the more you read.

Of course we know that Jean-Luc Picard spouted Shakespeare quotes often and Data attempted to understand humanity better by acting in Henry V. 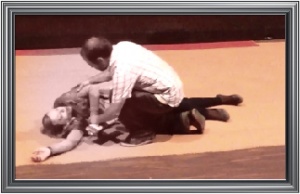 (Ophelia pretends to faint to draw attention away from her secret. Her father, Polonious, rouses her.)

Star Trek not your thing? How about Harry Potter? The Hogwarts Choir sings this during The Prisoner of Azkaban.

EYE OF NEWT AND TOE OF FROG,
WOOL OF BAT AND TONGUE OF DOG,
ADDER’S FORK AND BLIND-WORM’S STING,
LIZARD’S LEG AND HOWLET’S WING.”
– MACBETH, ACT IV, SCENE I

Familiar? This is foreshadowing for the book/movie and if you know the play MacBeth, you know the weird sisters predict all sorts of things that happen, but not in the way anyone could imagine. This happens in Azkaban too. Sirius Black is thought to be stalking Harry, but hey wait, that’s not quite what’s happening. I portrayed a weird sister in MacBeth last October. It was dream role.

From an even more classic book: Brave New World by Aldous Huxley takes it’s name from a famous quote from The Tempest. In the book John the Savage cherishes a banned copy of Shakespeare’s plays. 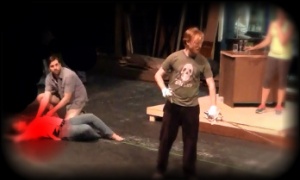 (The Queen has fainted. Hamlet calls for the doors to be locked and “there is treason, seek it out!”)

One final mention is Doctor Who.  (If you know me at all, you know I’m a Whovian!)  The 10th Doctor and Martha Jones meet Shakespeare in “The Shakespeare Code” as he’s writing Love’s Labors Won beset by a trio of witches. It’s perhaps one of my favorite versions of Shakespeare used in the world of science fiction. He’s portrayed as a genius, but also as a fairly regular man who swears and is attracted to Martha and driven a bit batty by the witches. The Doctor and Martha even mention Harry Potter and JK Rowling in this episode and use expeliarmus to defeat the witches. It’s a smorgasbord of references and quotes.

So, even if you didn’t understand Shakespeare in high school or you’ve been to one bad play that your sister did in college, or you just don’t think you would like it, I encourage you to attend a performance of a Shakespeare play. Before you go, google it for quotes used in scifi or fantasy or popular TV shows. This may help you pay attention if you are listening for lines are slightly familiar with already. Watch a modern interpretation on youtube if you think it might help. I promise you that once you understand it, you will start to enjoy it and then you will start to hear Shakespeare EVERYWHERE! 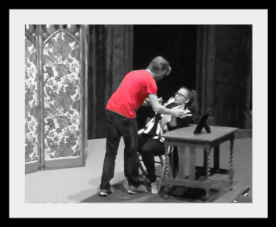 (Hamlet confronts his mother about her quick marriage on the heels of his father’s death.)

I interspersed video stills I pulled from the rehearsal video I took over the last few weeks. I played around with filters and enhancements. I hope to have someone video me this week so I can put up a bit of me treading the boards with the bard.

If you’re in the Pittsburgh, PA, area June 17-20, 2015, please join us at CCAC south campus in West Mifflin for Hamlet. Admission is free, but we are collecting non-perishable food items or taking donations. Thanks!

Thanks for the quotes

Sean Hall. All the Galaxy’s a Stage: Shakespeare in the Star Trek Universe. http://public.wsu.edu/~delahoyd/shakespeare/star.trek.html

I live in Pittsburgh, grew up in WI. I enjoy science fiction, cosplay, reading, writing, acting, directing, video editing, gardening, and learning krav maga. I have 2 amazing kids and a cute kitty who is often naughty, but sweet. As a woman above 35, I feel I have a unique voice in the worlds of Geek/Nerd culture. View all posts by geeksburgh